The History of Chyawanprash in Health Care

Today, the global nutraceutical market is a multi-billion-dollar industry and the popularity of nutritional and herbal supplements has exploded. Chyawanprash, the traditional Ayurvedic formulation that has been a staple for most Indians for decades, is now just one of many such products. However, it still remains the most popular and effective Ayurvedic polyherbal formulation, having been used consistently for millennia. The nutraceutical supplement is seeing a resurgence in its popularity because of scientific evidence that supports its traditional uses and health benefits. But, what is Chyawanprash and what role has it played in health care historically?

Chyawanprash is a traditional Ayurvedic supplement made from a concentrated blend of a variety of herbs and minerals. The formulation is regarded as a rasayana or rejuvenative in Ayurveda, ascribed with anti-aging and health promoting properties. The formulation was designed specifically to replenish depleted reserves of ojas, which is the life force, thereby increasing strength, stamina, and vitality. Over time, it has come to be used as a powerful immune booster, as well as a general health tonic that protects against common ailments that are pervasive today. (1)

The traditional Ayurvedic formulation is created from the extracts and processing of roughly 50 medicinal herbs. The most important of these herbs is amla or Indian Gooseberry, which is the primary ingredient in the natural nutraceutical formulation. Amla is also regarded as one of the richest natural sources of vitamin C (2). Chyawanprash also helps to balance all three doshas and this tridoshic effect makes it effective at relieving health conditions that are typically caused by aggravation or imbalances of the doshas.

Origins of Chyawanprash in Ancient India 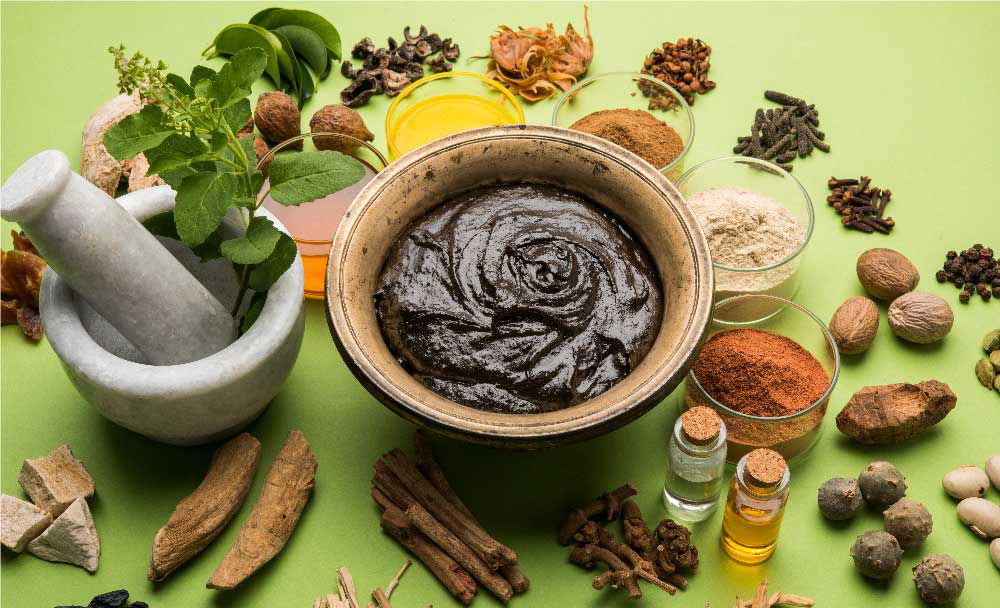 The origins of Chyawanprash are steeped in mythology and require a deep dive into the history of Ancient India and Ayurveda. Yes, the nutraceutical that remains most popular among Indians today dates back at least 5,000 years. The very name of the formulation comes from ‘Chyawan’, the name of a sage, and ‘Prasha’, which refers to medication or foods. Chyawan Rishi is a legendary forest sage from India’s Vedic era, which dates back to roughly 1500 – 500 BCE.

As per ancient Indian sacred treatises and mythological texts, including the Mahabharata and Puranas, among others, Chyawanprash’s original formulation was created by the twin Ashwini Kumar brothers. They created the formulation specifically for Chyawan Rishi to restore his youthful vitality and vigor. The polyherbal formulation was therefore first prepared at the sage’s hermitage at Dhosi Hill and it took on the name “Chyawanprash”. (3)

While it’s hard to separate Indian mythology from historical fact, we can state with certainty that the oldest recorded reference to the recipe of Chyawanprash can be found in the ancient Ayurvedic classical text known as the Charaka Samhita (4). This is one of the most revered Ayurvedic treatises that was written by the revered Ayurvedic physician and sage Charaka, sometime during the first millennium BCE. The text described it as superior to all other herbal rejuvenative formulations.

History of Chyawanprash in Health Care

Since its origin, Chyawanprash has been consistently used in Indian tradition as what we would now describe as a nutraceutical and functional food. This history of use spans nearly 5,000 years and it owes its success and longevity to its efficacy and wide-ranging health benefits. Throughout its history of use, Chyawanprash has been recommended by traditional physicians as a formulation for strengthening immunity and longevity.

With the emergence and spread of allopathic medicine in India during the early 1900s, Ayurvedic medicine began to enter a period of decline as it had already suffered under British rule over the past few centuries. Despite all of these factors, Ayurveda survived as a medical system and the Chyawanprash formulation didn’t just survive, but remained popular. It took on an even more prominent role in Indian tradition as the formulation made its entry into the nascent consumer market of the 1950s.

Since then, Chyawanprash has been a staple formulation that was used in practically every household, no matter the sociocultural, political, or ethnic background of India’s diverse population. There’s a reason for this huge success and long history of Chyawanprash, but this only became clear in recent decades. In fact, the term ‘nutraceutical’ was first used in 1989 by Stephen De Felice to refer to food or food extracts and formulations that could provide clear medical benefits in the prevention or treatment of health conditions (5).

Although Chyawanprash emerged long before the term nutraceutical, it is clear that Chyawanprash fits the bill as a nutraceutical or functional food and this is why it is still recommended as an essential supplement by most health experts today (6). With a complex nutritional profile that includes vitamins, protein, dietary fiber, carbohydrate, minerals, and phytoconstituents including flavonoids, saponins, alkaloids, and antioxidants, the formulation works to support immunity, health restoration, bodybuilding, and the prevention of oxidative damage, which is linked to aging and degenerative diseases (7).

Considering the rich history of Chyawanprash use and its proven health benefits, it should come as no surprise that Chyawanprash remains the most popular Ayurvedic product to date.

This article is reviewed by Dr. Pawan Kumar Sharma